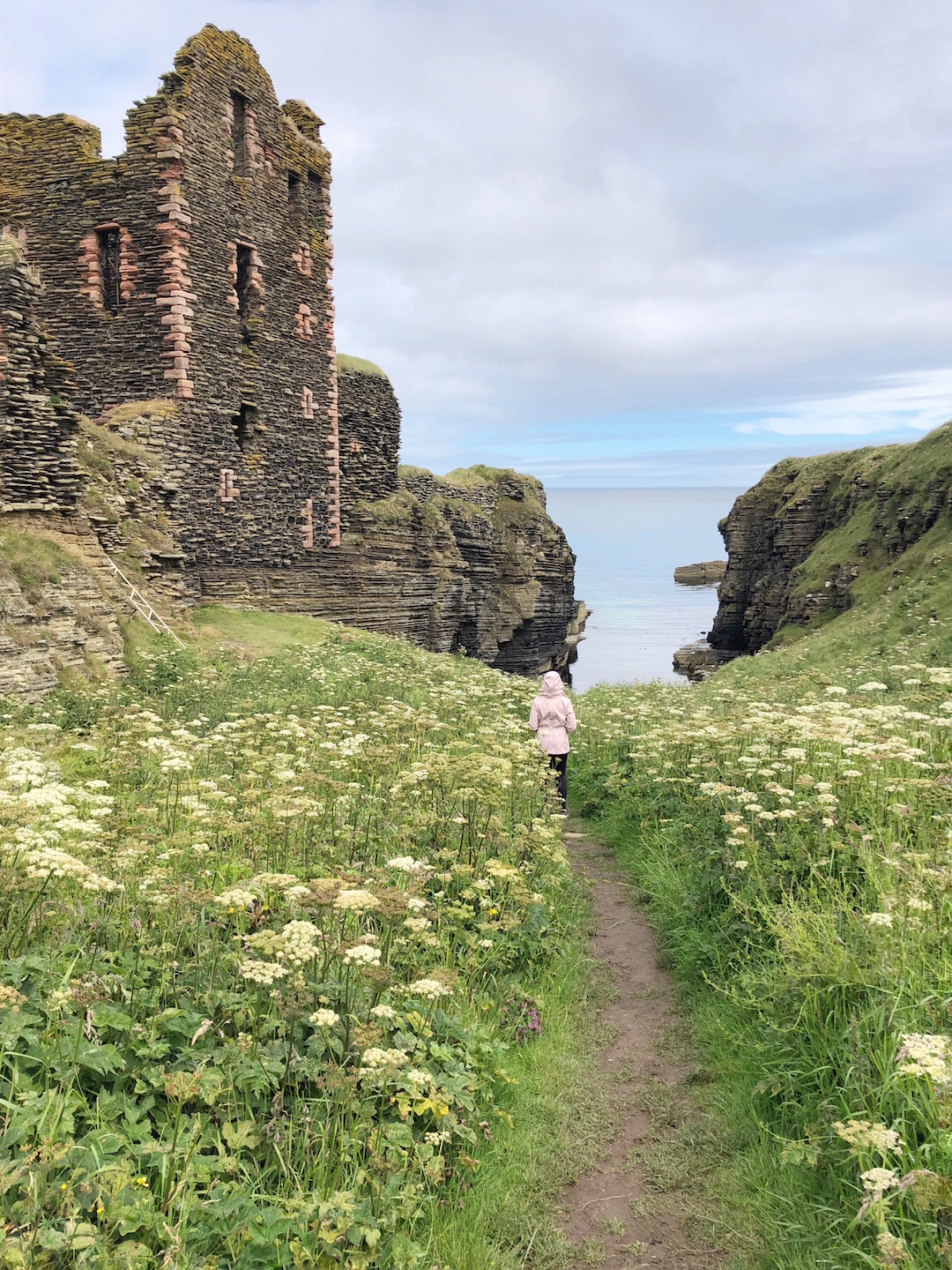 We woke up at 5:30 am (I would say the crack of dawn, but the sun was already up!) on a gloomy Scottish day to explore as much as we could of the North Coast 500. Our flight left at 8 pm that evening from Inverness, so we had a tight deadline. I hope you won’t, because this gorgeous part of the world deserves a few days to explore!

The Scottish Tourism Board’s website calls the North Coast 500 Scotland’s answer to Route 66, but I would argue that it’s a bit more like California’s Highway 1. Just a little bit though. It’s true they both follow the coast, but such wildly different coasts! While my soul-highway (is that a thing, and if not, can it be a thing?) CA-1 is bordered by the breathlessly blue Pacific on one side and brownish-green cliffs on the other, the North Coast 500, overlooks both the North Sea and the Atlantic Ocean. The cliffs are a lot greener, and sheep are ever present. Oh, and there’s a smattering of romantic, ruined castles, situated at the edge of cliffs for maximum adventuring.

We drove, but you could also walk the North Coast 500! I think this would truly be an amazing backpacking trip (and for those like me who would prefer to glamp, isn’t pitching your tent in the ruins of a 12th century castle glamping enough?)

We began the drive at Tomatin House, where we stayed during our Scottish holiday (more details coming soon in a future blog post). I highly recommend staying there if you have a large group and want a home base! However, if you want to pack a lot of exploring in, then treat it as a road-trip, pack up and leave for the next destination every day. Inverness, the capital of the Highlands, is usually the starting point of most drives (due to the airport). Jack’s Self Drive is a good car rental company with automatic cars and reasonable prices.

We had planned our first stop to be the Whaligoe Steps. The Whaligoe Steps are a series of 332 (that’s what I counted, some sources claim 330, while some romanticize them as 365) steps carved into the cliffs that lead down to the Whaligoe Harbor. This is one of the loveliest little hidden harbors, once used as a herring port. The steps, which were once used by fisherwomen to bring up baskets of herrings are now presented to you as a unique North Coast 500 hidden gem (in some aspects hidden because people either can’t find them, or can’t find parking).

In order to get to the Whaligoe Steps, enter Whaligoe Steps Cafe into your (offline downloaded) Google Maps. The steps begin right next to the cafe. There is a small parking lot (mostly for residents), however chances of grabbing one of the four lucky spots might be slim. I ran down to the cafe to ask them where we could park, and with true Scottish hospitality they offered us a spot near their employee cars! 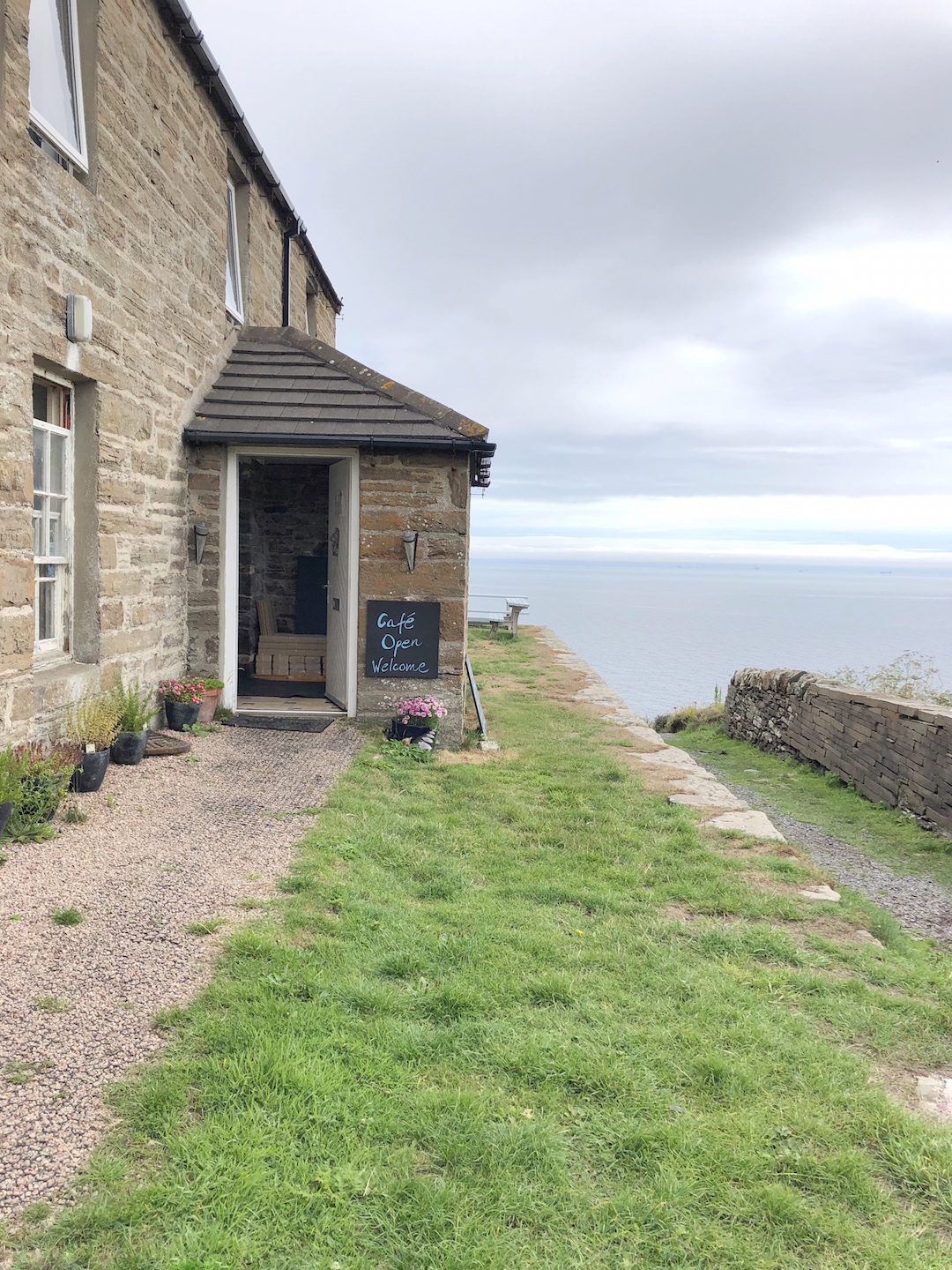 The walk down the steps is just so lovely! Wildflowers line the sides, the North Sea awaits you below. Sheep graze gently on the cliff top above, chuckling to themselves about their luck in scoring this view every single day. 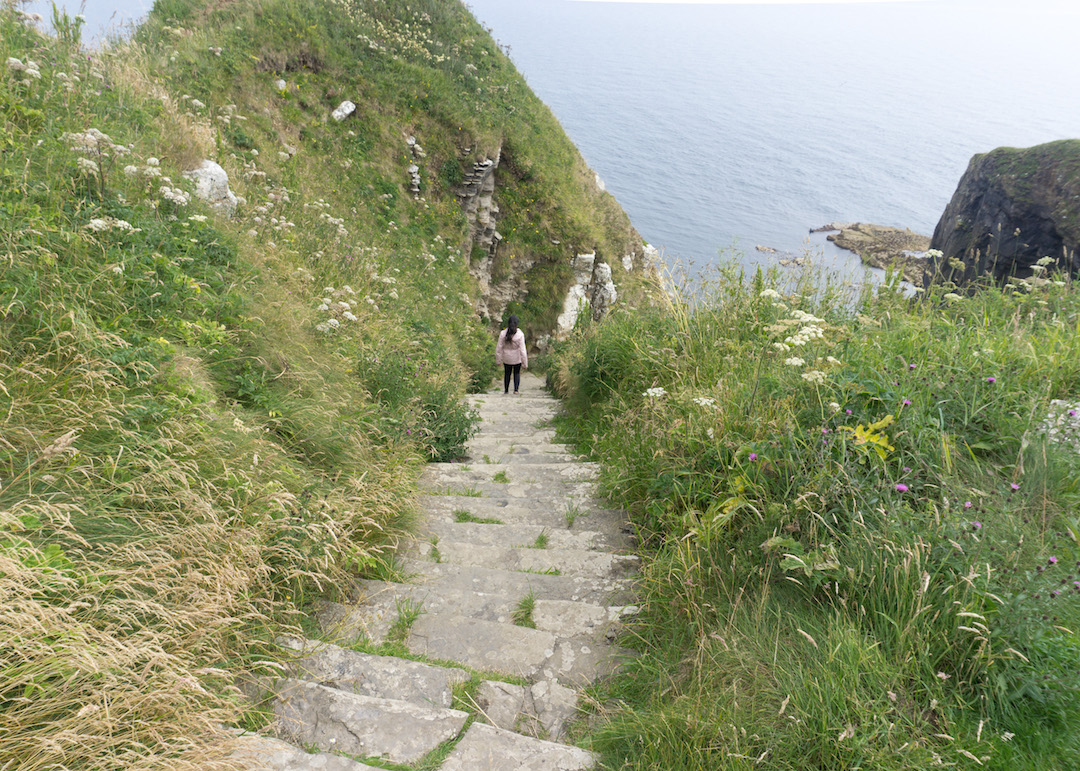 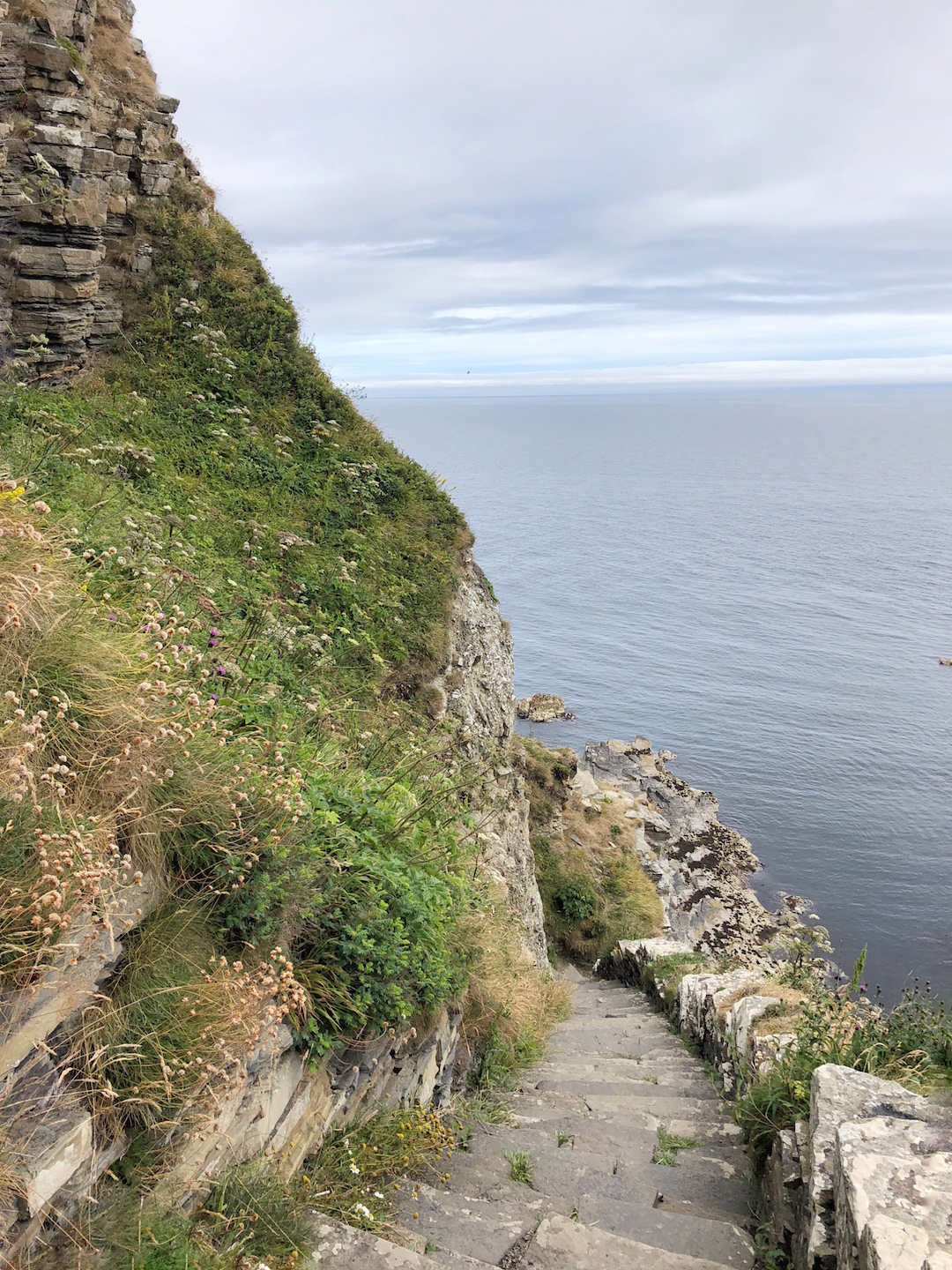 Getting to the bottom is easy. You might feel a slight panic if you see someone panting up the stairs, but the view pulls you back to living in the dreamy present moment. As an icing on the cake we got to see dolphins, sea lions and maybe puffins (we were silly enough not to bring binoculars) from the harbor! 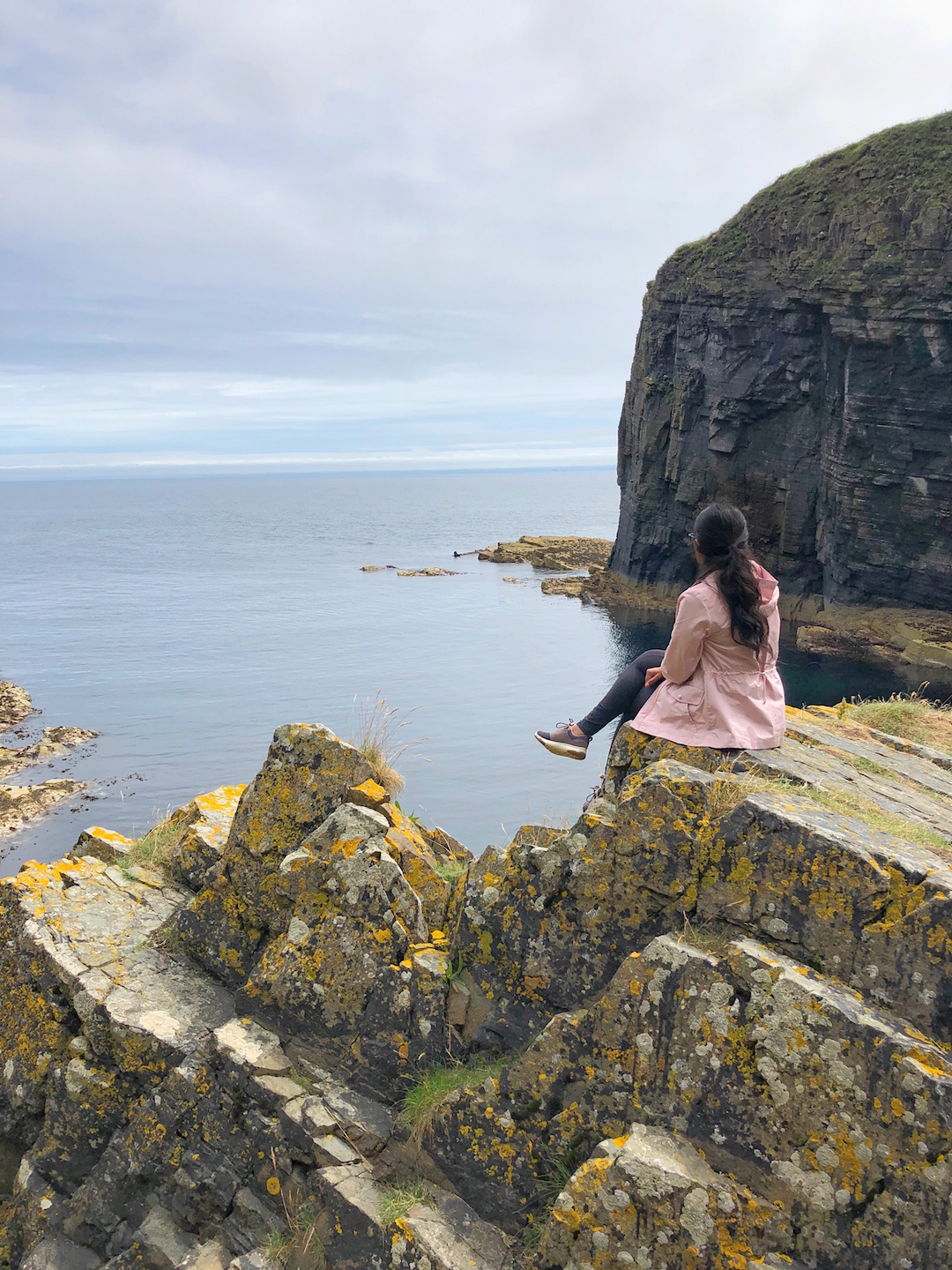 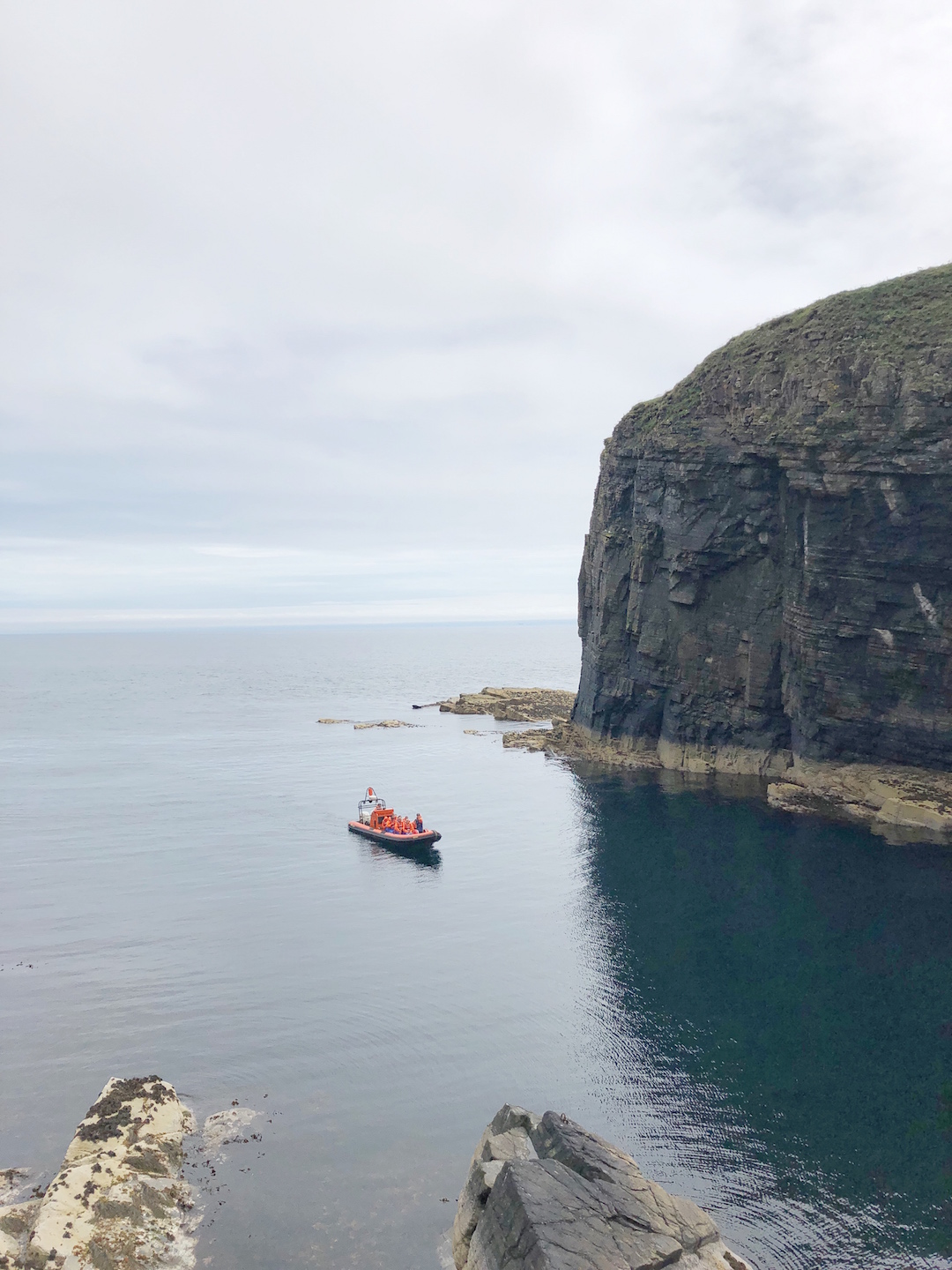 Yes, the way back is a bit rough, but seriously, it’s only 332 steps. It goes by quickly. Also, you could always use my foolproof method of catching a breath without looking too uncool – just whip out your camera / phone and pretend you HAD to stop to take some amazing pics! 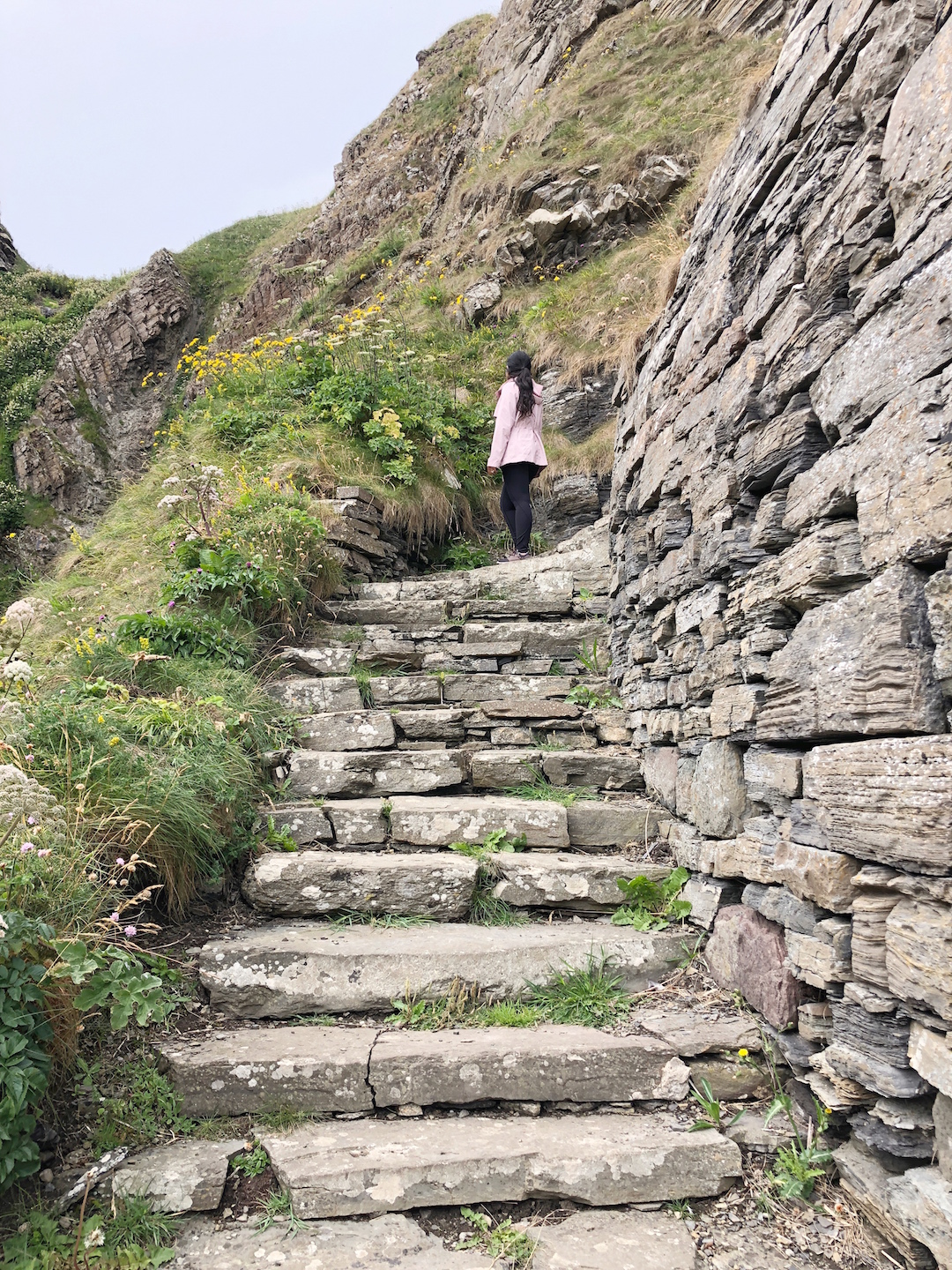 And the cafe is waiting at the top as a reward! 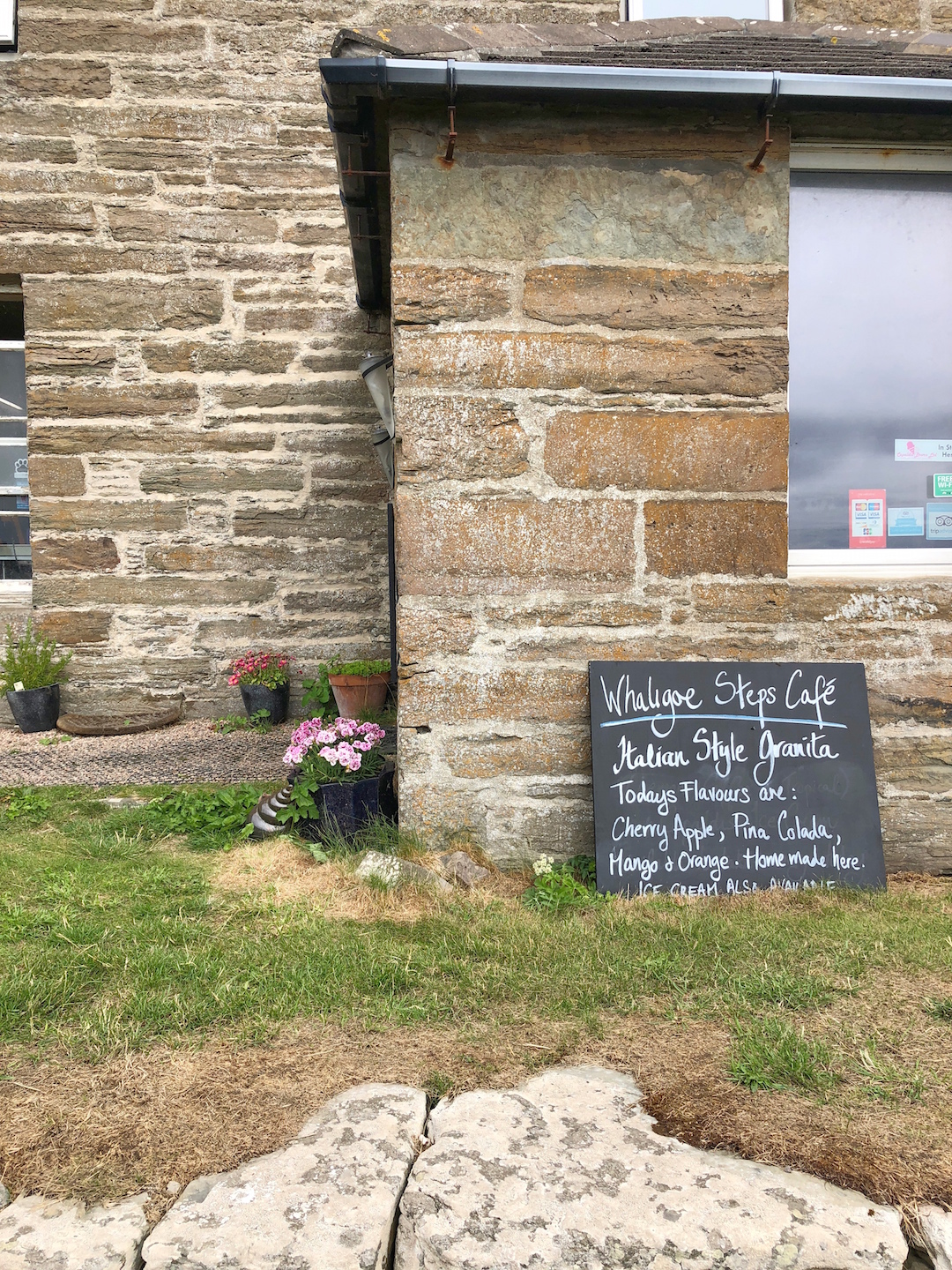 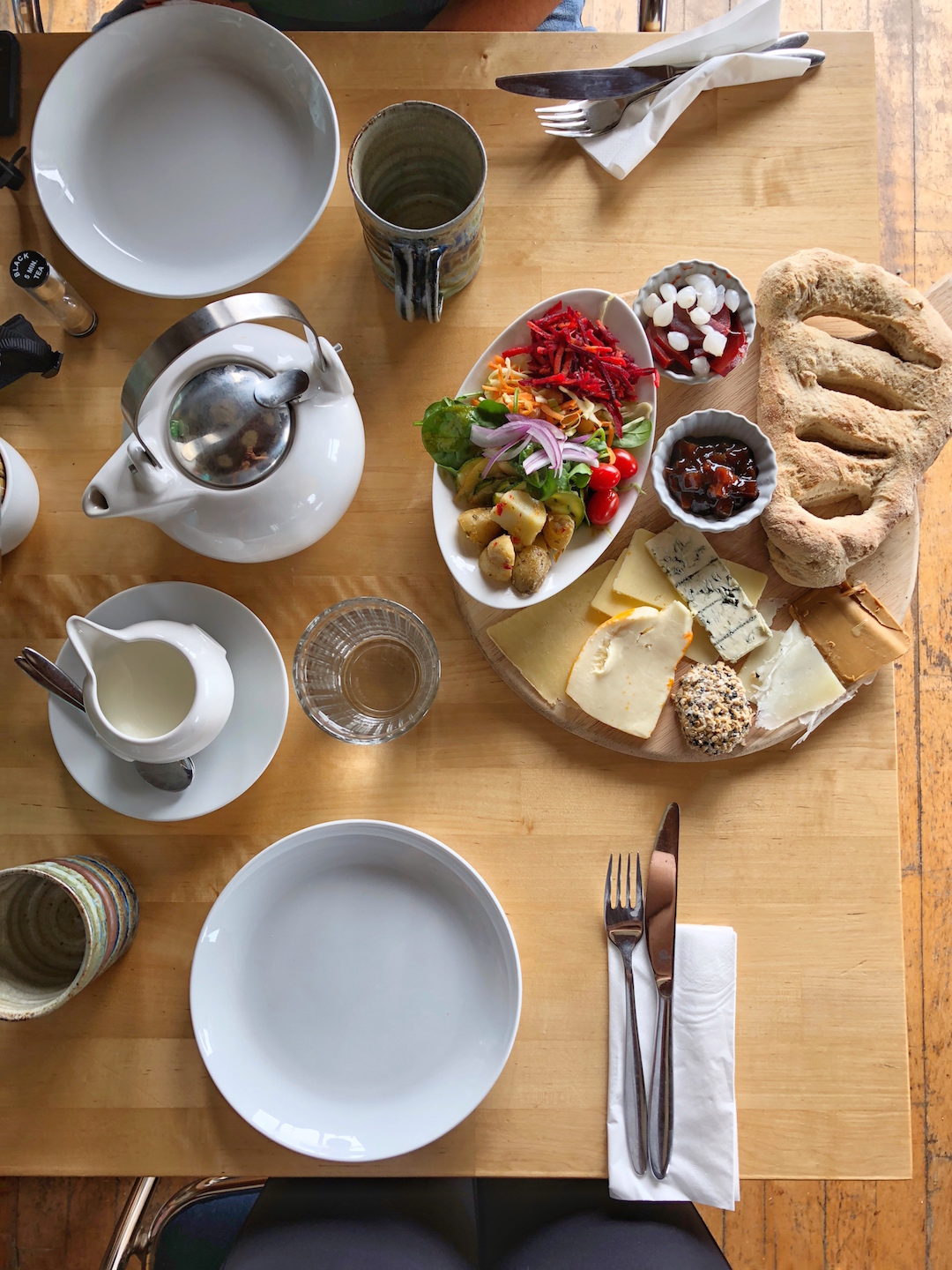 A cafe on a cliff, right next to steps leading down to a dreamy cove, run by the nicest people? It has to be a dream, or Scotland. The food was amazing as well, and the tea very refreshing after our trek back up 332 stairs!

Just a few miles north of the Whaligoe Steps is the town of Wick. This is where the fisherwomen went to sell the herrings, and this is where you might want to go to see the brownest town (unconfirmed but a strong suspicion) in Scotland. The streets are brown, the buildings are brown, the river was a little brown too. However, it is still so quaint and lovely! 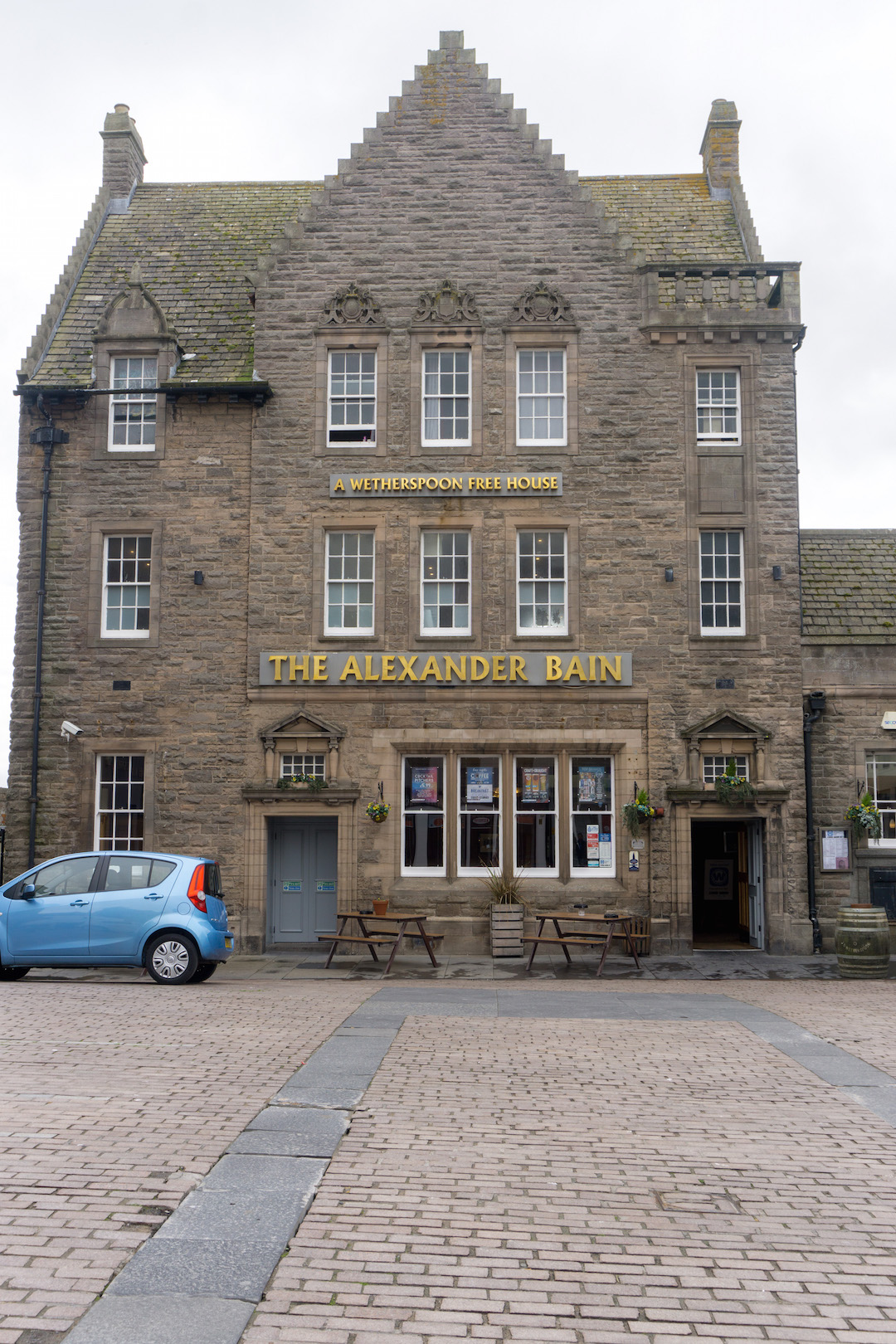 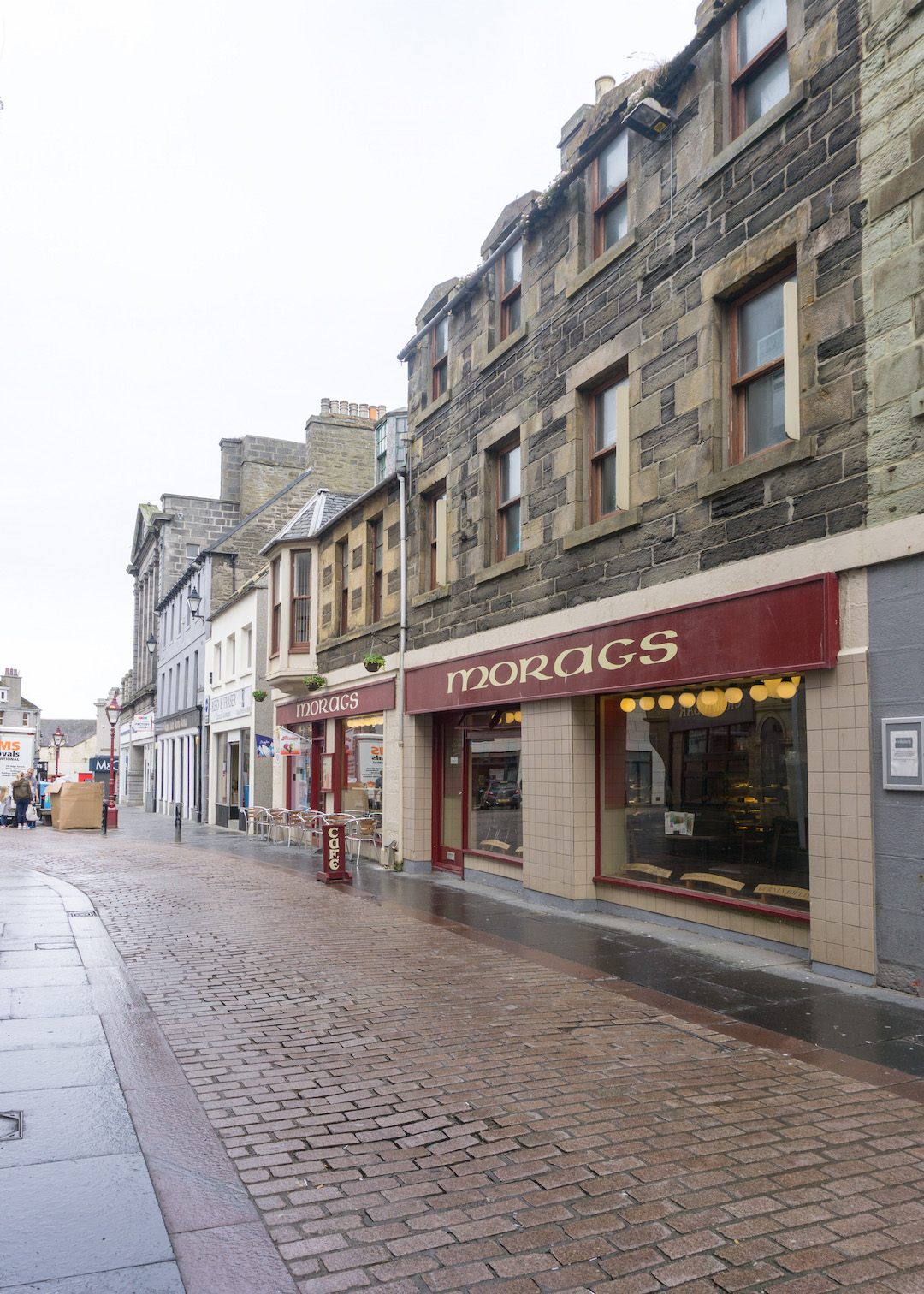 The reason you’ll want to stop at Wick is to see the Castle of Old Wick. The Castle of Old Wick is very aptly named, because it is old. One of the oldest castles in Scotland, it was built in 1160 by the Earl of Caithness, who was half Norse. The castle was essentially a tower on the promontory (you can see the remains in these pictures) and a few other buildings. Simple and elegant, the Earl of Caithness seemed to prefer dramatic views over ostentation. 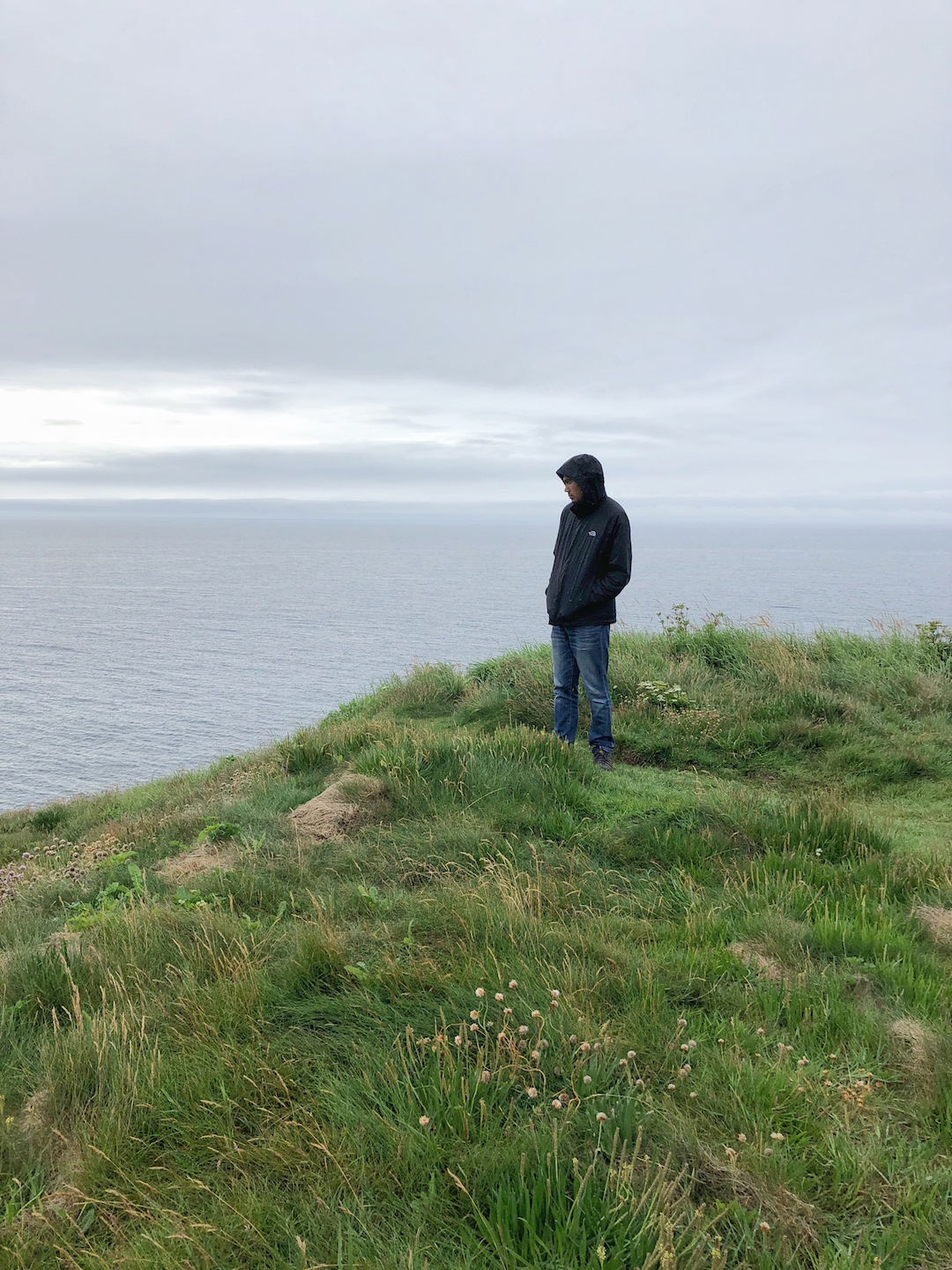 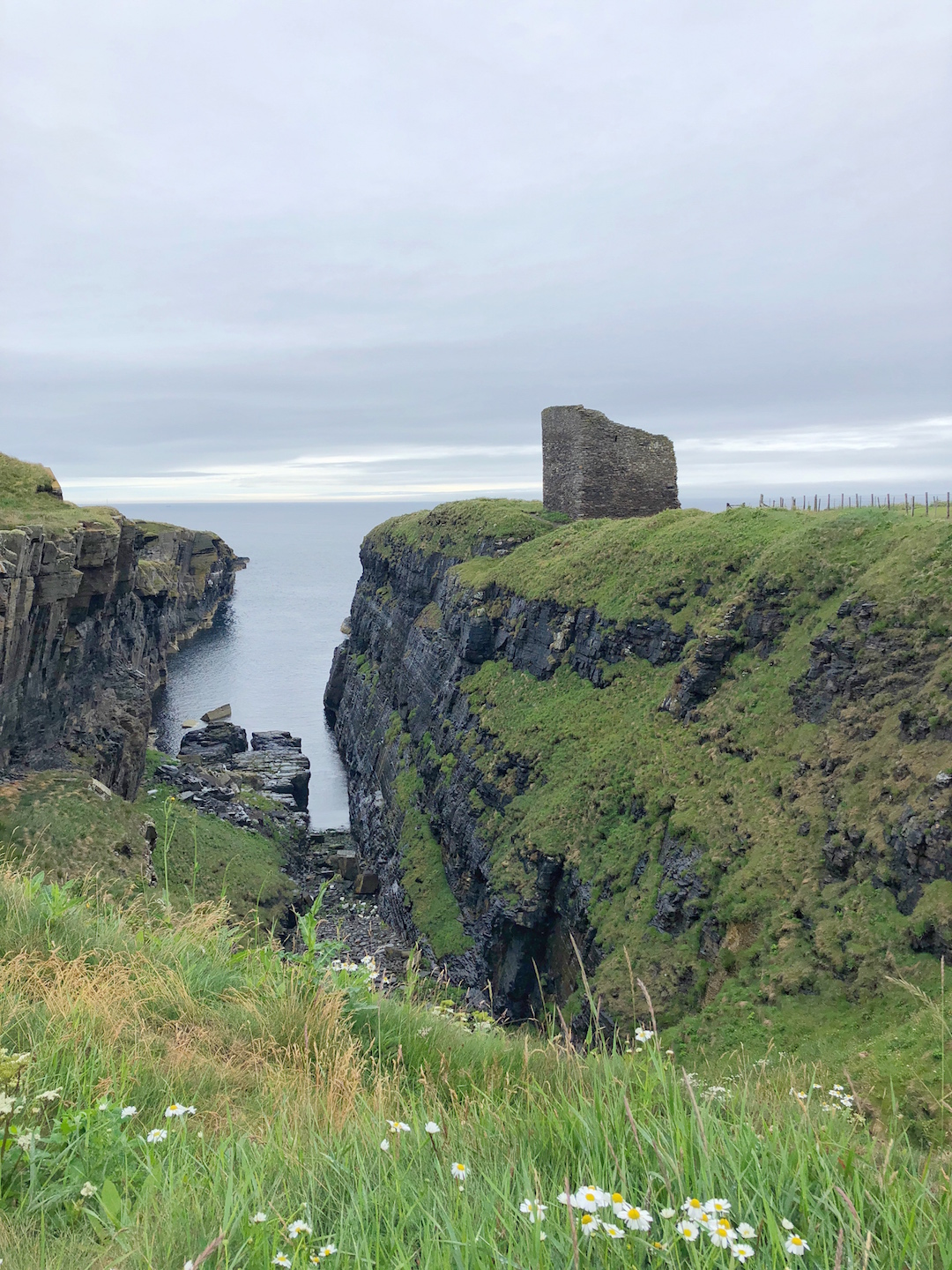 We arrived at the Castle (or what remains of the castle) early in the morning on a very gloomy day, and for all intents and purposes, we were the only ones there. However, when we got closer to the ruins of the Tower, we spotted a tent pitched in the middle! Imagine actually staying in a ruined castle – for free!! 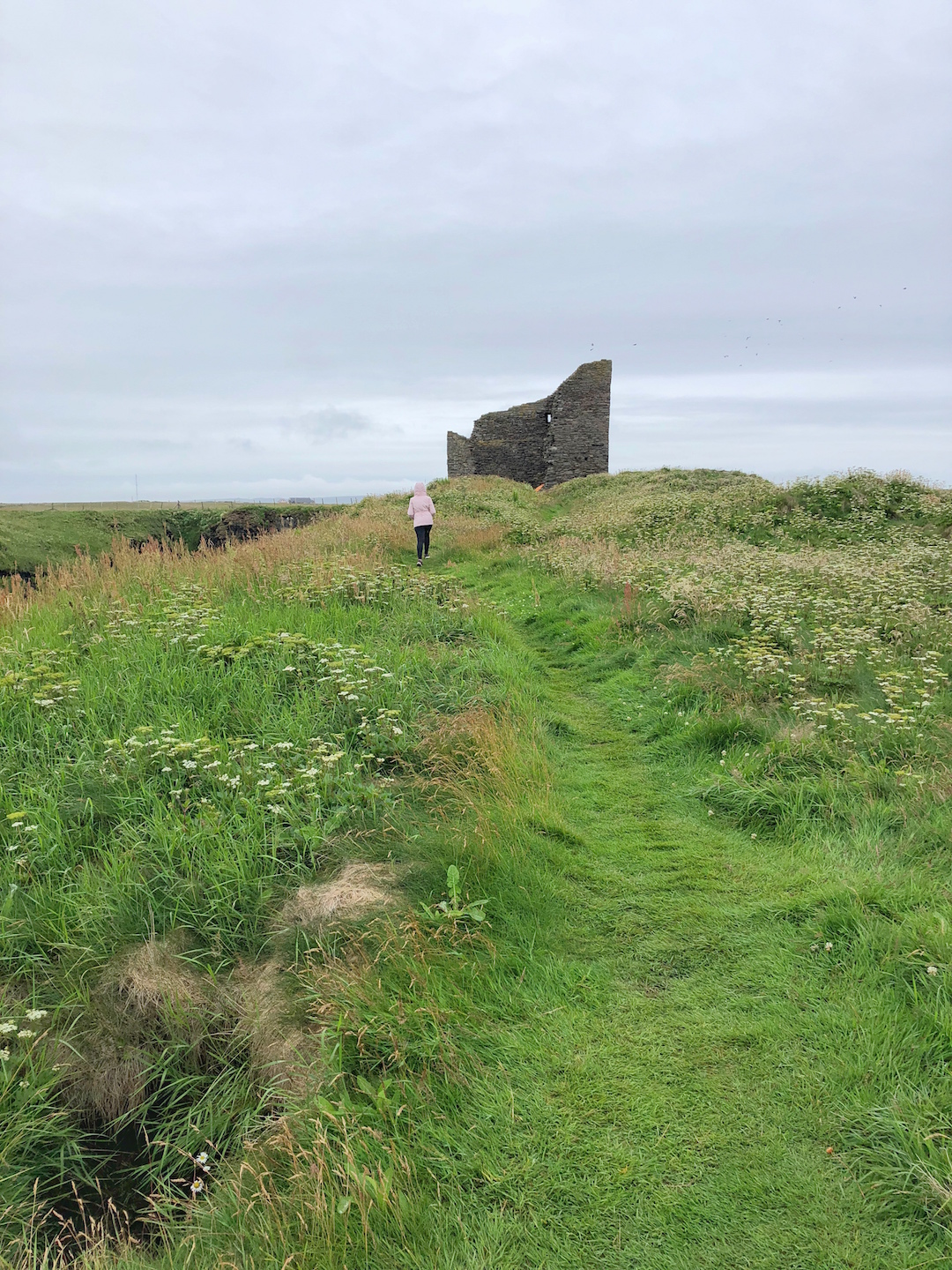 The next “castle” you should visit is The Castle of Sinclair Girnigoe. I recommend parking near the lighthouse (map to here) and then walking down the short coastal path to the castle ruins. Compared to the Castle of Old Wick, this looks very modern and finished(!) and the sheep nearby can attest to the amazing views. It really was so much fun to scramble through these ruins, watching the view from windows of the past, walking down to the rocks to spend some alone time with the sea, trying to guess the species of birds we spotted… 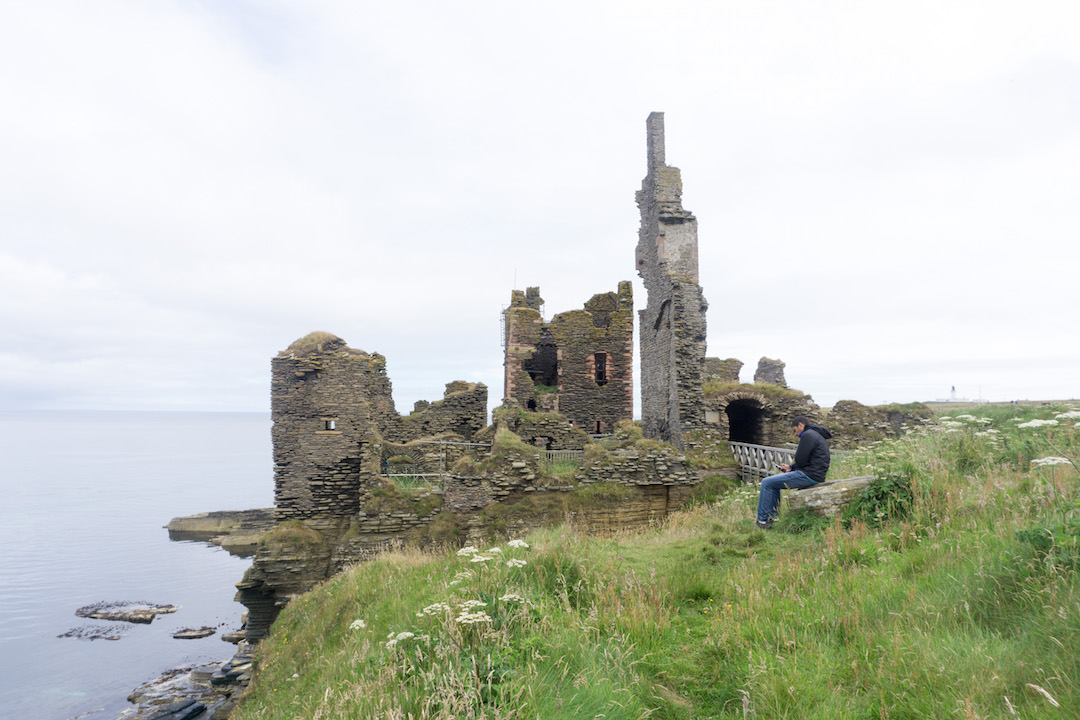 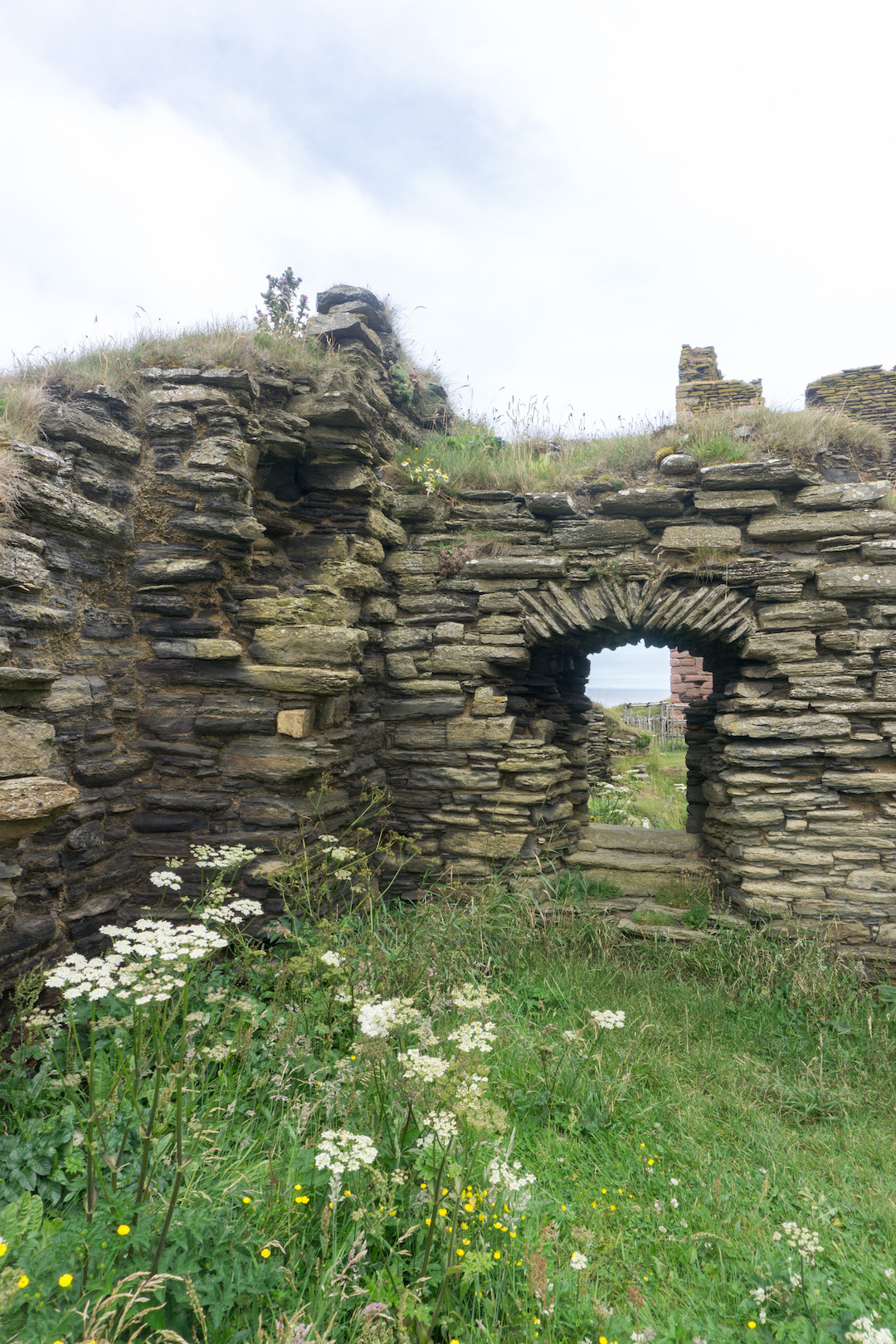 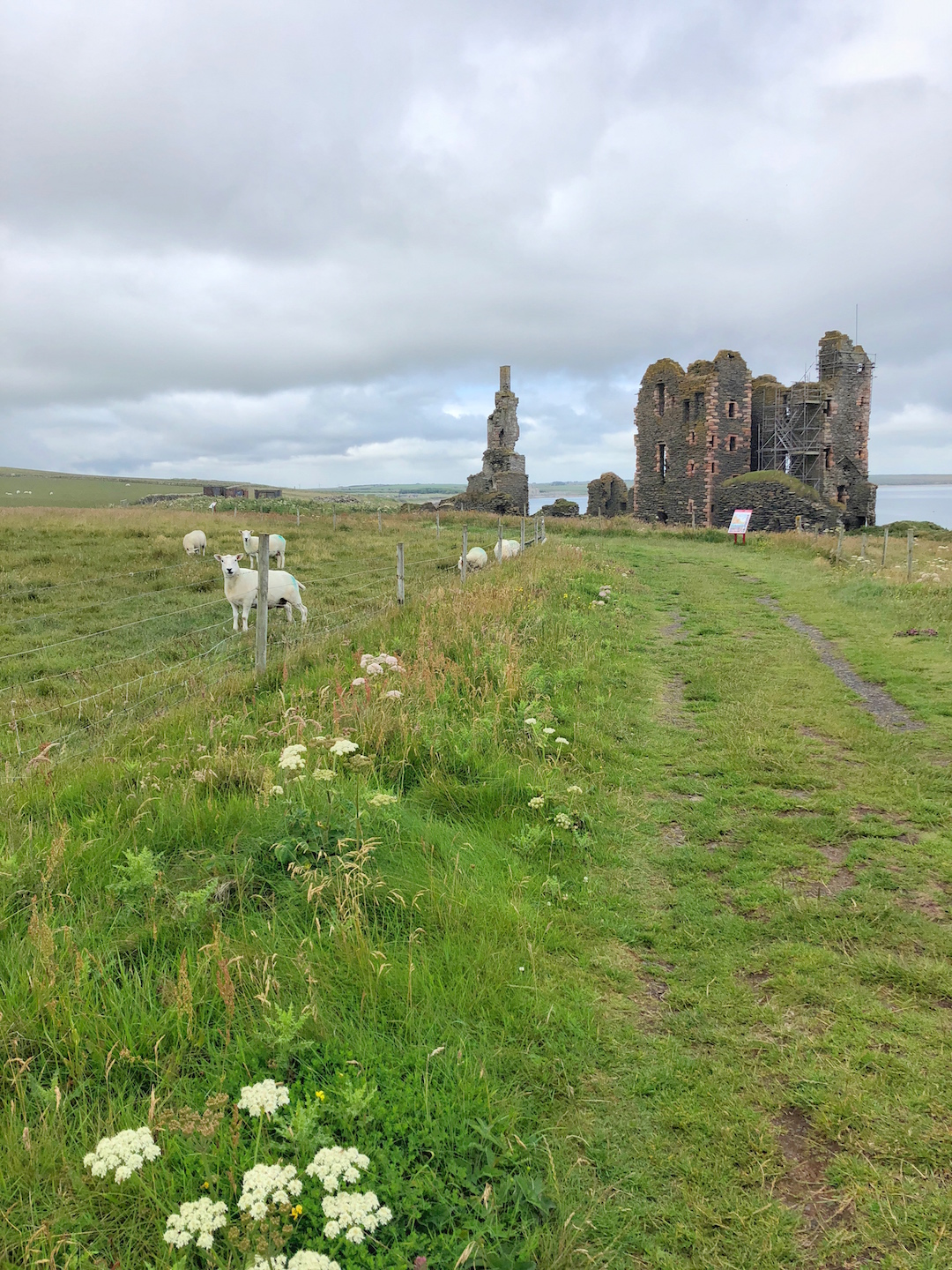 I think this would be an excellent place to picnic! Even if it is crowded (which it was not when we visited), you can definitely find a cute hidden spot to eat a sandwich and enjoy some tea! 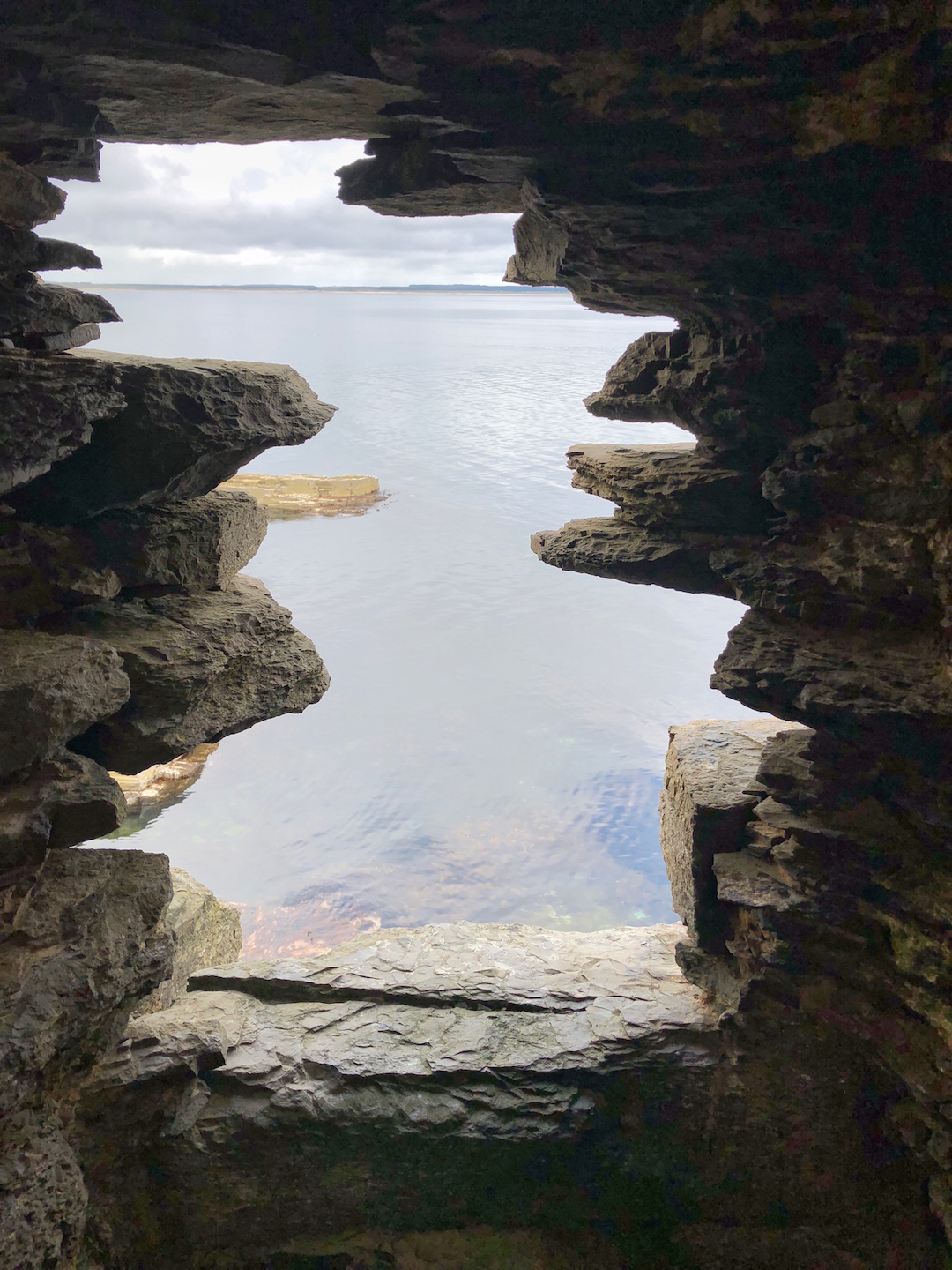 Note that the Castle Sinclair Girnigoe has a suggested donation of £1 per person, so bring some coins with you. It is an honor system, they have a box up-front, but truly is a very small price to pay for the enjoyment you will get while visiting. 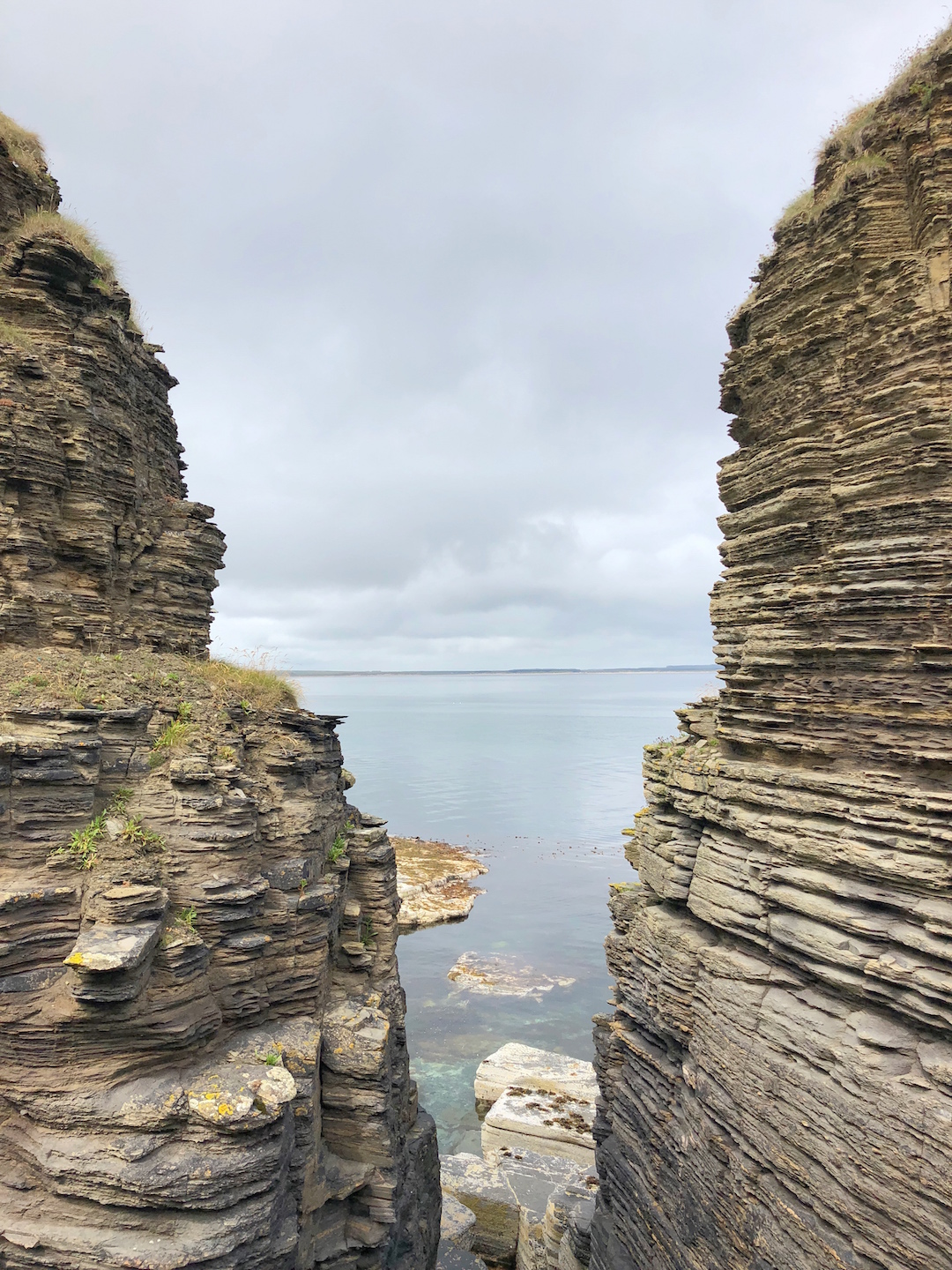 Unfortunately we couldn’t go any further north on this route since we had to get back and catch a flight. I highly recommend you dedicate at least 5 days to the North Coast 500 alone. It’s so worth it! Some of my family visited Applecross on the Western side of the route, and were so thrilled with this tiny town that it made me quite envious that I missed it! What I envied even more is that they ran into the Coffee Rescue Land Rover near Stromeferry and got some delicious coffee + the Applecross recommendation. My mother described the coffee rescue as a literal rescue (she’s a little bit addicted to coffee like me) and I only found out later that it’s actually named ‘Cofee Rescue’! The Coffee Rescue is a husband and wife team who drive their coffee Land Rover around, rescuing people from feeling too fatigued on the road trip! I’m hoping one of my family writes a guest blog post about the Coffee Rescue and Applecross (hint, hint mom) – so stay tuned! 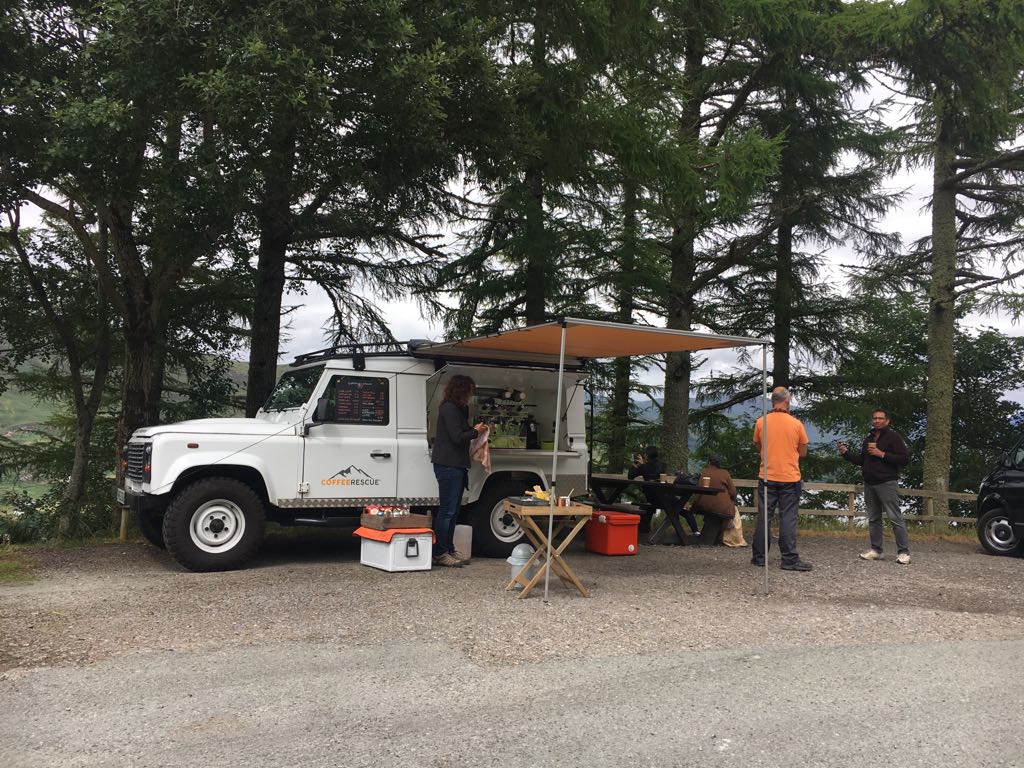 Picture donated to my blog by my mom

Here is a map with all of the North Coast 500 destinations I had saved! The ones not mentioned in my blogs are what I had hoped to see – so if you do go there, drop me a comment and let me know if you liked it? 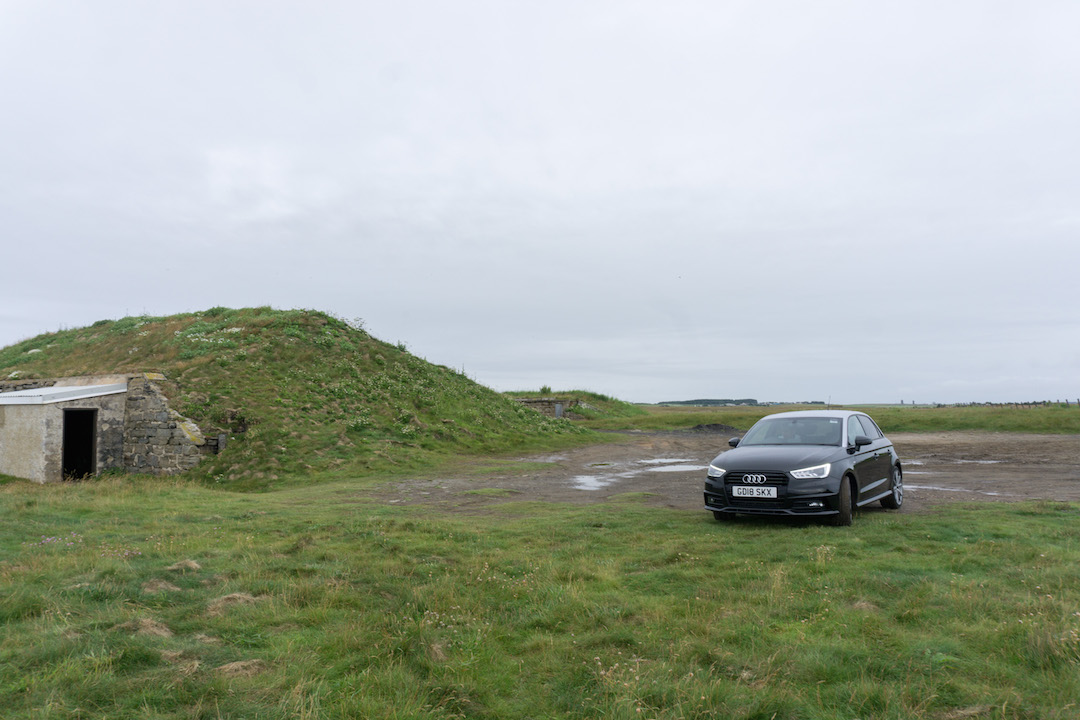 Scotland is a country that I would love to visit over and over again. It doesn’t look very big on the map, but there is so much to explore! We spent five days just in the Scottish Highlands and didn’t even scratch the surface! Next time, I’d love to complete the North Coast 500 road trip, visit some of the islands (especially the Isles of Mull and Staffa, the Outer Hebrides and the Shetland Islands) and then head east to Aberdeen and Dunnottar Castle. Ahh, wishing I could be back there already!

Pin this post for future reference! Pin images are conveniently located below. If you have no idea what I mean, read my Planning with Pinterest post! 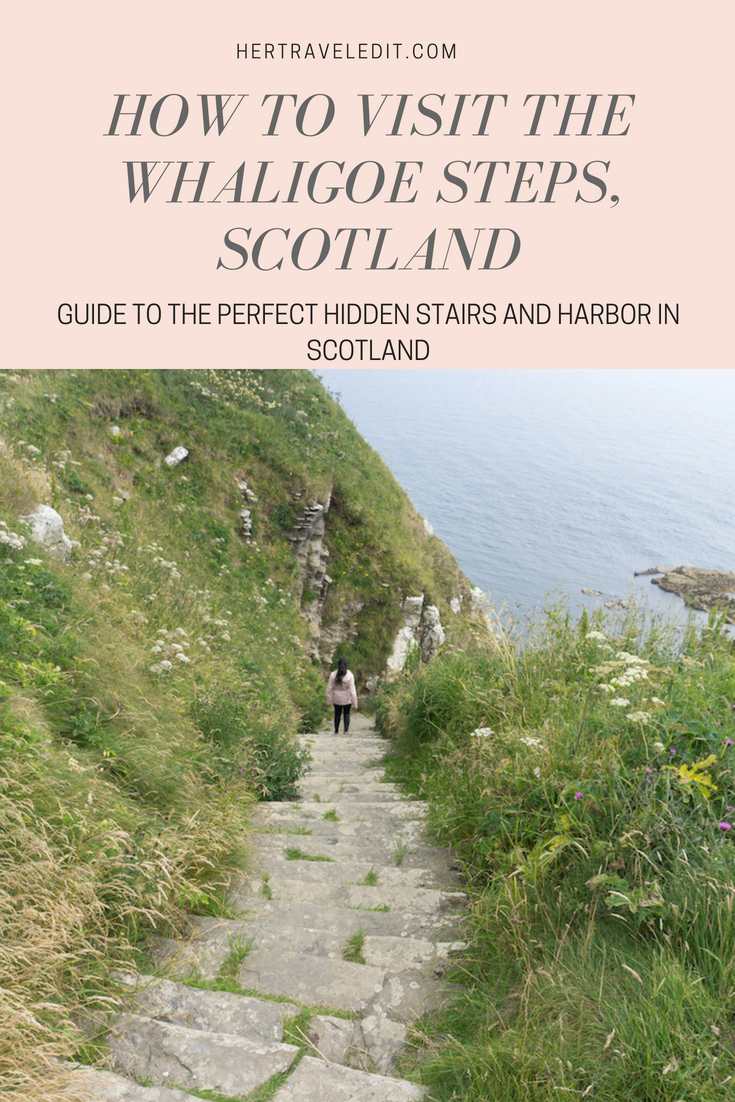 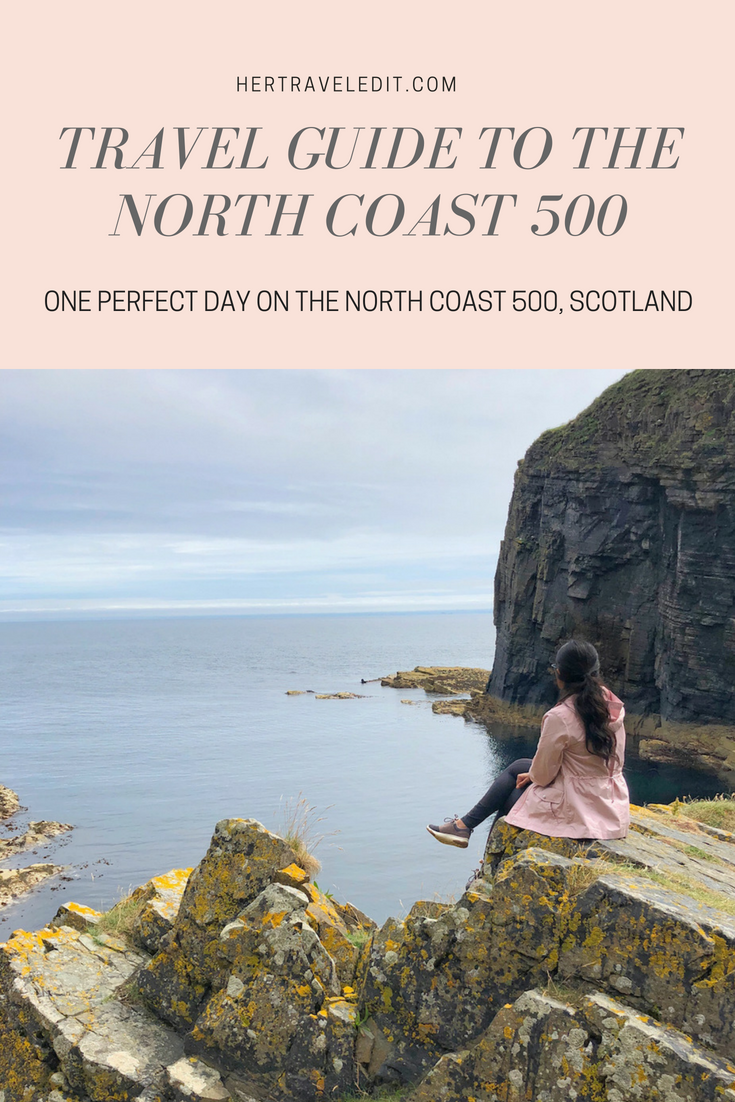 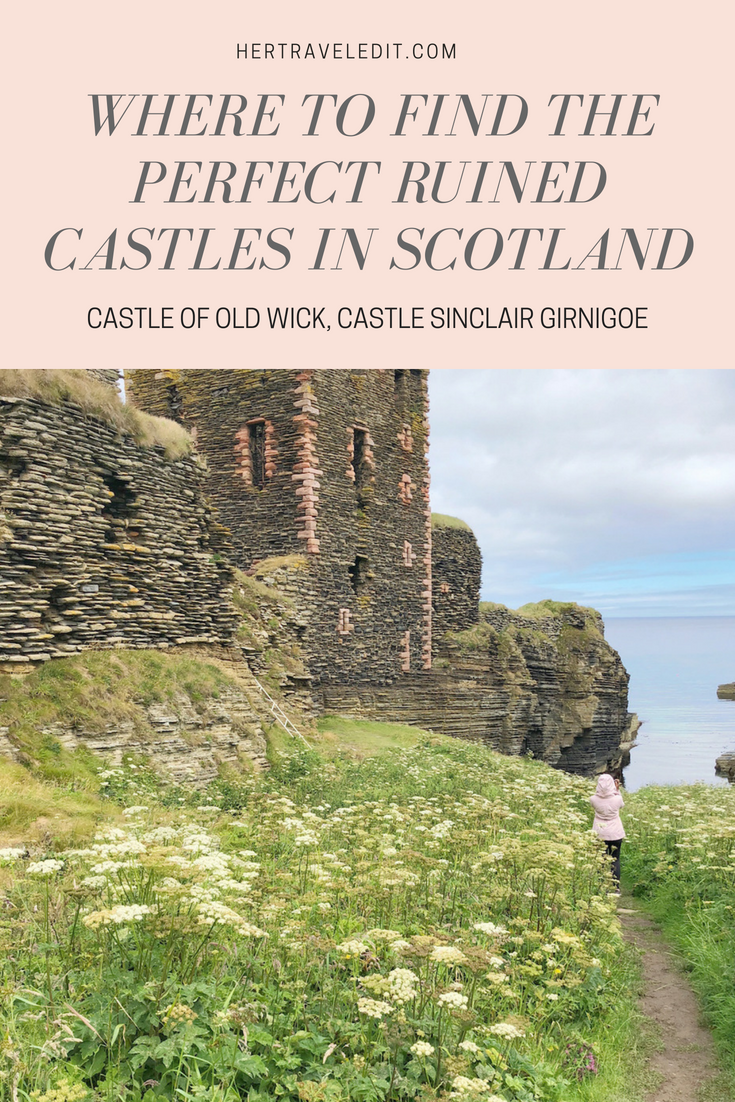 I am a full time software engineer and an enthusiastic traveler. I live in New York City but have traveled to over 23 countries! I love to share my travel experiences, tips and tricks, to help others have painless journeys. I hope you find this website useful, please leave a comment if it helped plan your trip!

END_OF_DOCUMENT_TOKEN_TO_BE_REPLACED

Travel Tips and Stories Straight to Your Inbox!

I fell asleep to the sound of the waves and I woke up to the songs of the birds. I lay in bed for a few minutes trying to decipher them. I wished I could see them from the skylight,…